On being an apparent internet sensation

So today, my mum tagged me on a Facebook link and said, “don’t know how they got a hold of your photo.”

We always check out Christmas Island posts if we see them. And this is where she made her discovery.

There’s a photo of me, probably about 5 years old, next to a wall full of mature red crabs on Christmas Island’s Greta Beach (I think) during the red crab migration. 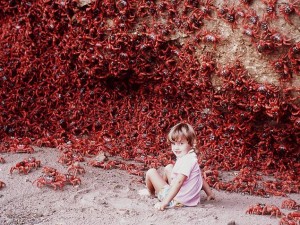 Wasn’t I adorable? Those Christmas Island red crabs migrate to the sea to shake off eggs and then go back to their normal lives.

So I have been famously in photos with red crabs before–I’m the (infant) model on the back of a David Attenborough documentary called Kingdom of the Crabs, when the larval crabs return from their sea sojourn. There’s a possibility that this is in the book my dad contributed to with John Hicks and Holger Rumpff. However, if that’s the case, Dad (who really is the only one who would have taken the photo) has not been asked.

I’m genuinely astounded at how far it’s travelled. The photo is on over 450 sites (barely one with attribution, may I add) and one site attributes it to Christmas Island Tourism, who tell me it’s not part of their media package (thanks folks!). It’s made it to Italian Huffington Post, San Francisco Times, random blogs in German, Pinterest and apparently originally Reddit. The earliest Greg and I have found is 2011. I haven’t been able to find the Reddit post with my photograph on it, nor has Greg at this stage. Viralnova seems to be the place most of the sites got it from. I have to say, it has freaked me out a little to see myself all over the world.

Despite the fact that neither my parents nor I have uploaded it, and it’s a 25+ year old photo, it’s a real lesson in how once an image is out there, it’s really hard to retain control of it. It’s also a lesson to those using images, particularly those of children; if you can’t find an attribution, it’s likely that the original owner doesn’t know it’s in use. And on the other end of it is probably a reasonably freaked out adult…

Update: Greg has now narrowed it down to a 2011 NewsCorp post. I’m going to pursue this just to find out.