Blood donation: other ways you might not know you’re helping

I’m a big believer in blood donation. My grandfather had an aggressive leukaemia and in the course of his treatments received bucket loads of blood. I’m sympathetic to haemophiliacs and burns victims, cancer patients, mothers and babies in distress childbirth, or those in surgery who need our blood. I try to donate as often as I can, but mostly donate plasma these days, as I feel less fatigued afterward.

I made a discovery when I came back for my first donation since I returned to Australia. When I had to sign to update my new release form, I noticed it now recorded my cytomegalovirus (CMV) status.

CMV is a herpes virus. It manifests for most as no more than a low-level cold. Around half of us have already contracted it without knowing. The largest risk is to immuncompromised people, more so for those who haven’t had it, and pregnant women in their first trimester. It can be a congenital condition, infecting 33% of babies and causing a myriad of problems where the mother has contracted CMV for the first time while pregnant. There’s less risk when the mother has had an infection.

The Red Cross Blood Service screens for it because they don’t want to give CMV to someone who hasn’t had it, or to a baby or to someone immunocompromised (like my grandfather fighting leukaemia), in the same way they screen for ABO (blood type) and Rheusus groups (that good old positive or negative next to your blood type).

But, apart from identifying those who’ve had the virus, they also use blood products to treat the mothers, by using hyperimmune globulin, which is a blood component created by our bodies in an immune response. These immunoglobulins are collected from the donors blood to be bottled and given to  Receiving this immune product allows for a passive immunisation, where someone else’s immunoglobulins fight the disease, like your own would if you had the antibodies. In the same way, nursing mothers protect their baby with the colostrum and antibodies in their milk; another great example of passive immunisation.

This realisation is important to me for one reason. My best friend caught CMV in her first trimester. We didn’t know much about it at the time because it’s not really talked about. And there’s not much in the way of treatment to allay some of the worse problems it can cause in a baby’s development. 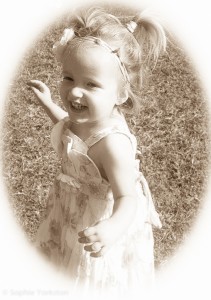 Happy little girl who is a congenital CMV survivor

Baby is here now, and she’s still on her journey, which will no doubt still have some ups and downs. But blood donors like you and me gave a little girl a fighting chance to beat the effects of CMV.

So I’d like to thank you if you donate, and for having tried even if you don’t fit the very strict Red Cross standards. I’d like to encourage people who haven’t thought to donate for a while, for whom it has just fallen off the radar, to ring 13 14 95 or visit www.donateblood.com.au to see if you qualify.