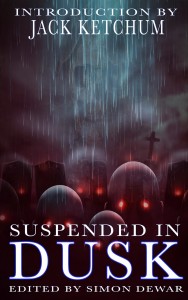 I’ve been wanting to read Suspended in Dusk for some time, given all the praises flying around in my social media circles. SQ Mag (the ezine I edit) competed against this anthology in a strong field for the Best Edited Work of 2014 in the Australian Shadows Awards, from the Australian Horror Writer’s Association. Some of the eminent Australian speculative fiction authors even featured in both our works.

In Suspended in Dusk there’s monsters in the traditional guise and monsters loosely associated with human beings. There’s a tangible thread of the threat of dusk woven through this collection of thematically diverse stories, each bearing up a dark or horrific element. While the thread linking the stories is tenuous, Simon Dewar has collated some excellent pieces.

Alan Baxter’s palliative care nurse protagonist drifts dreamlike through wards, compassionate and available, in Shadows of the Lonely Dead. Rayne Hall’s Burning world is pure small town nightmare. Maid of Bone draws out the ostracised, the lonely in an intimate way Tony Bennett seems to know. Miriam Vale is seemingly picked straight from memory by S.G. Larner, and that phenomena where the stranger always knows best. Tom Dullemond perfect captures the clinical detached psychopath in Would To God That We Were There. Wendy Hammer’s Negatives is an excellently painted twin horror in a deserted theme park.

There’s other situations that are unexpected, like vicious coral zombies and devolution, in truly abhorrent settings like fat camps. Angela Slatter turns some post-apocalyptic tropes on their heads in The Way of All Flesh. Where recognisable creatures from the dark appear, the authors have tried to give their kind a new twist, a deeper meaning.

On the whole, Suspended in Dusk is a well put-together anthology. Some of the stories are reprints, if they seem familiar, but each was a piece worth reinvigorating. As with any collection, some of the pieces had a style or voice or plot that was more appealing, but that’s the downside of collected works: short stories are always compared.

Suspended in Dusk is a strong first anthology from the collaboration of Simon Dewar and Books of the Dead Press. If a creeping chill is your choice of entertainment, Suspended in Dusk won’t disappoint. It is obvious why this appealed to the Australian horror community, and its follow-up anthology will be eagerly anticipated.