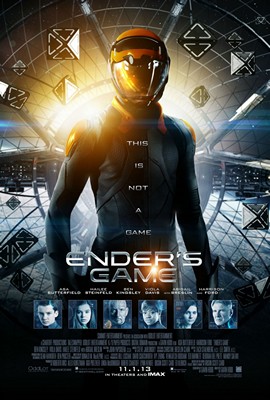 This week, I went to see the much anticipated cinematic release of Orson Scott Card’s Ender’s Game. Recognising its name as a quintessential science fiction read, and a highly awarded one at that, I have been looking forward to seeing it. So much so that I also read the book.

I hear you all thinking: Big mistake! It’s a well-tested fact that reading the book often leads to disappointment in the theatre. I suppose I had been lulled into a false sense of security with the big hit cinematic adaptions of the Lord of the Rings trilogy, Harry Potter and The Hunger Games.

What I tend to find with successful cinematic adaptions is that they bring a stunning visual element to the table, while retaining the essence of the original novel. They lead the audience to feel the protagonist’s pain rather than telling them about it. They take the places they’d only ever imagined and give them a visual spectacular.

For those that haven’t read Ender’s Game, it’s set on a future Earth that has been twice the victim of attacks from a massive alien fleet, and it was only the uniting of the different world factions that allowed humanity to beat the attackers, the buggers (or Formics).  The collaborative international and interstellar protection department, the International Fleet, start selecting gifted children for roles in command of the war, due to their quick reflexes and malleable minds.

When reading the book, it really struck me as a story of the isolation that brilliant young adults often feel. At home, they aren’t necessarily understood. At school, they are distanced from their intellectually inferior peers or they are positioned in direct competition with those peers that might understand them. In this world that Orson Scott Card created, they are allowed to reach their full potential and are listened to and respected by adults. Of course, there is manipulation too, but this is considered part of the training. Ender in the story is continually isolated as part of developing him to his fullest potential, but he learns to win his peers to his side with respect, skill and strategy. Keep in mind, he’s ten when he graduates to command school, where he’ll learn to There’s also a strong socio-political secondary story involving Ender’s also brilliant siblings, but that is not relevant to this discussion.

The producers of the movie had two facets that would make it a brilliant movie. One, dazzle everyone with the beauty of space and zero-gravity combat. Two, sell the story as the epic it is, by focusing the story on Ender, saviour of the earth. Sadly, I think that they failed on both these counts.

Zero-gravity battles in battle school were how Ender won his team. For what was a year of his life, this was glossed over. You lost the sense of his triumph, the camaraderie of the battle school when they got into the teams and his inspiration of the others. Not to mention that there was only two sessions in the battle dome. With the amazing ability for virtual effects production teams have at their disposal in this age, there is no excuse for not allocating a large proportion of screen time and budget to it.

What was also part of Ender’s brilliance was taken away by adult producers, forgetting that the story of the brilliant kid is what makes the whole book. Motivations and intelligent manoeuvres that are his, they put into the adult machinations, which messes with the brilliance of what spoke to a generation of pre-teens and people that felt they never fit.

They also turned an ending of maturity and compassion, of a soldier learning to change to fit peacetime, and made it trite. There was none of the feeling of understanding, family, the understanding of impending doom, or of forgiveness.

And while Sir Ben Kingsley is a great actor, and did a fine job portraying the Maori soldier Mazer Rackham, his accent wavered between New Zealander (though most of his New Zealander vowel sounds were good) , Australian and British. But there was one part where he described the traditional face tattooing, and I just didn’t feel the reverence and gravity in it. When one of several tried-and-tested Maori actors, like Cliff Curtis or Temuera Morrison to name a few, would have known that feeling and could have done justice to it, it just feels like a waste.

Other conversions of popular speculative fiction have been successful because they turned their stories to spectacle, but didn’t lose sight of the themes of the original story. Lord of the Rings mostly pleased fans known as some of the worst pedants and nitpickers of all the fandoms. Changes made were largely grudgingly allowed, particularly as they came from other original texts from the same world. Harry Potter largely stuck to the story and added lots of magic to scenes pre-teens to adults had been imagining for years. And Hunger Games keeps promising more blockbuster for your buck.

To transition a book successfully to an on-screen experience without destroying it for the fan base that will ultimately be a big part of your audience, it needs to be imagined in big, beautiful spectacle. It needs to remain true to the main characters and themes of the book. Ender’s Game was always going to be hard to get out of Ender’s head and onto the screen, but it disappointed the promise of a highly-regarded book transitioned at this stage in the evolution of cinema. Especially given the speculative fiction translations that had come before.