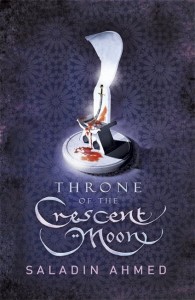 Sometimes it takes a different perspective to refresh a genre. Sword and sorcery for a long time has been too full of clichéd plot and motivations. It is a paucity of different cultural voices that has tired this genre; but the wonderful news is that Saladin Ahmed’s Throne of the Crescent Moon is a refreshing read with a flavour of the historical Arabian empires.

Set in the Kingdom of the Crescent Moon, Doctor Adoulla Makhslood is the last of the ancient profession of ghul (demon/animated substance, for those of us without the proper grounding in Arabic folklore) hunters in the city of Dhamsawaat. More interested in his tea and delicacies, Adoulla is tiring of the hunt and ageing faster every day. His beloved city teems with tension, caught between a Khalif ruining the city with his selfish desires and an outlaw calling himself the Falcon Prince. Even with the help of his warrior dervish assistant, Raseed bas Raseed, Adoulla is on the back foot with the latest bone  ghuls stumbling his way.

After a rescue by the shape-shifting tribeswoman Zamia Badawi, last of the Badawi band murdered by the marauding ghuls, an uneasy alliance forms between the hunters. It is crucial, as ancient dark forces thought to be long extinguished are working their way back into the world, and the threat to the world is great.

It seems so trite to compare a stories of folklore origin, especially since Throne of the Crescent Moon is such a breath of fresh air. This novel does, however, conjure all the mystique and magic of Thousand and One Nights. But there’s much to enjoy in the characters themselves: tortured love, loss of faith in life’s path, enduring love of age, greed, unwilling heroes, devotion to tribe and family…Saladin’s novel is populated with people. This may sound like it should be a given with most books, but few writers manage to do it well. Shifting tensions between the devout Raseed and his mentor, the irreverent Adoulla, are a lovely contrast to the traditional reverent student-teacher relationships that appear so frequently in sword and sorcery novels.

The rich culture of the world is brought to life in the small details, from Adoulla’s tea, to his conversations and the architecture. Social structure of historical Arab-Islamic cities strikes me as genuinely reflected, and the Badawi tribe appears a nod to the role the African tribes played in the history of the Arabs. Fight scenes, which are not normally a drawcard for me, intrigued me, particularly the dervish fighting Raseed embodied. And even if the battle is the good versus evil, there are small details that allows Saladin to paint in some shades of grey.

Throne of the Crescent Moon was Hugo and Nebula-nominated for good reason; that it was a debut novel recommends Saladin Ahmed’s work even more strongly. If a fan of the traditional sorcery genre, expand your horizons; this has all the adventure of the genre with more soul. If a general speculative fiction fan, pick it up for a good read that redefines what the speculative fiction voice is.

You can find out more about Saladin Ahmed at his website, or follow him on Twitter to be entertained, educated and appalled about how pervasive anti-Islamic (and even just extremely ignorant) voices are in the field of fiction and in the greater world in general.

Pro-tip: If you enjoy the book, I was lucky enough to discover that Saladin Ahmed has a short story collection, Engraved on the Eye, that has a story involving the good Doctor and Raseed, and I was lucky enough to pick it up on Amazon for the lovely price of free. Plus there’s some other intriguing shorts that make it worthwhile.

« Previous post
Update on my writing
Next post »
Review of Stephen King | On Writing: A Memoir of the Craft